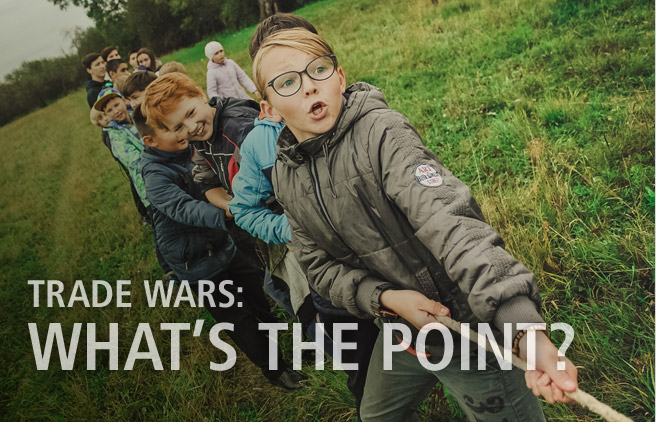 At the beginning of the year, an escalating trade war between the U.S. and China was noted as a risk to our outlook, which was that global economic growth is likely to remain positive in 2019, albeit at a much slower pace. Although we were initially pleased with the positive tone surrounding U.S.-China trade talks in the first quarter of the year, discussions have taken a turn for the worse in the past month. There’s large debate about who “wins” in such a dispute, but the reality is that both sides lose. Tariffs, like other taxes, are inherently growth-sapping and potentially inflation-boosting. Arguably, the U.S. has less to lose, with shipments to China coming in at less than 1% of U.S. gross domestic product. However, the U.S. imports more than 20% of its goods from China, leaving the consumer, the engine of the U.S. economy, worse off. Not to mention the impacts on business confidence and profit margins.

Globalization was one of the key factors that has driven manufacturing margins higher since the 1980s. Over the long term, the reversal of globalization will be inflationary, but the secular forces of disinflation driven by technological disruption and demographics should keep inflation pressures under control. Inflation (or lack thereof) has been puzzling policy-makers for the past decade. It’s the effects on growth that are most concerning.

There’s no doubt that current battles in the U.S. over trade, mostly with China, are already hurting U.S. expansion. The annual change in nominal U.S. goods exports and imports was negative in April. Factories have cut output this year, leading to a slowdown in payroll gains. The slowing of employment last month was a stark reminder of the effects trade wars can have on the real economy. Equity markets posted negative returns in May, but they have recovered most of those losses so far in June. The market is expecting trade-war dampened economic performance will compel the U.S. Federal Reserve (the “Fed”) to ease monetary policy. The 10-year U.S. Treasury bond yield has been hovering just above 2%, a level not seen for several years. The most likely scenario is two quarter-point cuts by the Fed to its federal funds rate, likely occurring in July and October. The Fed is unlikely to ignore the potential threat of more damage to come. If the U.S. administration imposes tariffs on the remaining US$300 billion of China’s goods, the U.S. economy will be severely challenged to grow at potential and even more easing of monetary policy may be required.

The effect on Canada

Canada is not immune to the effects of a trade war between the world’s largest economies. The U.S. still accounts for almost three-quarters of Canadian exports. A slowdown in the U.S. has consistently hurt Canadian economic growth. Canada must also contend with retaliatory measures imposed by the Chinese over the detention of Huawei Technologies Co., Ltd.’s chief financial officer. The bar for a Bank of Canada (BoC) interest rate cut is higher than for the Fed as the BoC’s key policy rate of 1.75% is less than the rate of inflation, and thus negative in real terms. The BoC will likely cut its policy interest rate alongside the Fed, but not as much or as fast. The Canadian dollar is likely to benefit from a narrowing of interest-rate differentials, while a broader risk-off environment will remain an opposing force.

The next turning point may be the G20 meeting June 28-29 in Osaka, Japan. If economic conditions on both sides of the Pacific continue to deteriorate, we could see some type of truce. However, we could also see the U.S. administration expand its use of tariffs, as they recently did by threatening Mexico over border security. Expanding its trade disputes to include automotive imports would elicit retaliation from the European Union and Japan, which could further damage the global economy.

We are closely monitoring the implications of these developments on our global economic outlook and will act appropriately to best position our funds’ portfolios. Our current base case of a global economic slowdown this year, but not a recession, remains, and with central banks back in monetary-easing mode, we still expect strong asset price growth this year. Absent the U.S.-China trade war, the global economy is on steady ground. We used the most recent market correction to continue to build our funds’ equity positions, and we remain above neutral in equities across our portfolios. We also used the recent rally in longer-dated bonds to reduce the funds’ positioning in favour of shorter-dated bonds and cash.

This document is intended solely for information purposes. It is not a sales prospectus, nor should it be construed as an offer or an invitation to take part in an offer. This report may contain forward-looking statements about one or more funds, future performance, strategies or prospects, and possible future fund action. These statements reflect the portfolio managers’ current beliefs and are based on information currently available to them. Forward-looking statements are not guarantees of future performance. We caution you not to place undue reliance on these statements as a number of factors could cause actual events or results to differ materially from those expressed in any forward-looking statement, including economic, political and market changes and other developments. United pools are managed by CI Investments Inc. Assante Wealth Management is a subsidiary of CI Investments Inc. Neither CI Investments Inc. nor its affiliates or their respective officers, directors, employees or advisors are responsible in any way for damages or losses of any kind whatsoever in respect of the use of this report. Commissions, trailing commissions, management fees and expenses may all be associated with investments in mutual funds and the use of the Asset Management Service. Any performance data shown assumes reinvestment of all distributions or dividends and does not take into account sales, redemption or optional charges or income taxes payable by any securityholder that would have reduced returns. Mutual funds are not guaranteed, their values change frequently and past performance may not be repeated. Please read the fund prospectus and consult your advisor before investing. Assante Wealth Management and the Assante Wealth Management design are trademarks of CI Investments Inc. CI Multi-Asset Management is a division of CI Investments Inc. This report may not be reproduced, in whole or in part, in any manner whatsoever, without prior written permission of Assante Wealth Management. Copyright © 2019 Assante Wealth Management (Canada) Ltd. All rights reserved.