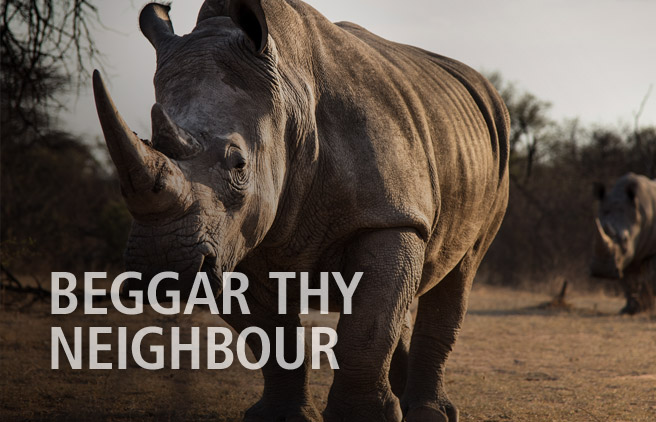 A beggar-thy-neighbor economic policy is when one country attempts to remedy its economic problems by means that tend to worsen the economic problems of other countries. In the last few weeks, the trade war has morphed into a potential currency war, in which countries devalue their currencies to get a competitive edge for their exports. We have seen unconventional monetary policy (quantitative easing, negative interest rates) indirectly cause currency devaluations in the past, but the key concern this time is with respect to China’s overt exchange rate targeting policy.

The escalation started on August 1, 2019 with U.S. President Donald Trump saying he would place tariffs on practically any imports from China that don’t already have them. The People’s Bank of China reacted swiftly, allowing its currency to depreciate by the most since 2015 and reach more than seven yuan per U.S. dollar, a threshold it had prevented the yuan from crossing in recent years. The U.S. promptly labelled China a currency manipulator. Investors were rattled by the fact that no trade deal was on the horizon, especially coming just weeks after constructive talks. Responding to the mounting threat to global growth, bond yields plunged, and the stock markets retreated from highs.

There are two prevailing beliefs behind this devaluation. One is that China’s strategy has shifted from a constructive discussion to an effort to destabilize global financial markets. Since stocks in China are held by a small minority of Chinese citizens, policymakers are not concerned if prices drop in the short term. In contrast, U.S. stocks are widely held by its citizens and Trump has quoted market gains as a barometer of his success. A significant pullback could undermine his chances for re-election. The less sinister reason is that the Chinese economy is slowing, and policymakers are reacting appropriately to help their domestic producers.

On the other side of the world, speculation has been building that the U.S. may intervene to intentionally weaken the dollar. Trump has also stepped up his relentless assault on the Federal Reserve in a series of tweets that renewed his demand for interest rate cuts, which would weaken the dollar. Trump’s latest attack repeats a series of criticisms, breaking almost 30 years of White House tradition of staying publicly silent on the central bank out of respect for its independence. As troubling economic data pile up, which many economists have blamed on tariffs imposed by Trump and uncertainty surrounding his trade war with China, the question being openly debated is whether lower borrowing costs will be enough to offset the damage being caused by the trade war.

What’s next for the U.S. and China?

There is the risk that further escalation of the trade war may lead to a much worse outcome for the global economy. On the flip side, a Trump tweet about a breakthrough with his “good friend” Chinese President Xi Jinping could quickly change sentiment. Since the devaluation, Trump has said he would delay implementation of the tariffs, originally scheduled for September 1, 2019 until the fall. With the negative correlation between bonds and equities holding, the downside risk in our portfolios is being mitigated. We continue to monitor the markets and are maintaining adequate amounts of cash, bonds and a small amount of gold as we endure heightened volatility.

This document is intended solely for information purposes. It is not a sales prospectus, nor should it be construed as an offer or an invitation to take part in an offer. This report may contain forward-looking statements about one or more funds, future performance, strategies or prospects, and possible future fund action. These statements reflect the portfolio managers’ current beliefs and are based on information currently available to them. Forward-looking statements are not guarantees of future performance. We caution you not to place undue reliance on these statements as a number of factors could cause actual events or results to differ materially from those expressed in any forward-looking statement, including economic, political and market changes and other developments. United pools are managed by CI Investments Inc. Assante Wealth Management is a subsidiary of CI Investments Inc. Neither CI Investments Inc. nor its affiliates or their respective officers, directors, employees or advisors are responsible in any way for damages or losses of any kind whatsoever in respect of the use of this report. Commissions, trailing commissions, management fees and expenses may all be associated with investments in mutual funds and the use of the Asset Management Service. Any performance data shown assumes reinvestment of all distributions or dividends and does not take into account sales, redemption or optional charges or income taxes payable by any securityholder that would have reduced returns. Mutual funds are not guaranteed, their values change frequently and past performance may not be repeated. Please read the fund prospectus and consult your advisor before investing. Assante Wealth Management and the Assante Wealth Management design are trademarks of CI Investments Inc. CI Multi-Asset Management is a division of CI Investments Inc. This report may not be reproduced, in whole or in part, in any manner whatsoever, without prior written permission of Assante Wealth Management. Copyright © 2019 Assante Wealth Management (Canada) Ltd. All rights reserved.